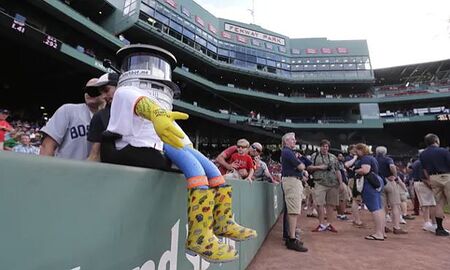 Here, HitchBOT is being trained to recognize American baseball and to not react badly to what passes for American fashion sense.

HitchBOT was a Canadian device built to ask the question, "Can robots trust humans?". Cynics already knew the answer but a bunch of naïve Canadians just had to know.

Equipped with GPS and a 3G connection recharged with solar panels, HitchBOT could carry on basic conversation, babbling like any crazed and bipolar hitchhiker picked up by the side of the road. Then HitchBOT would eventually be driven to another spot where someone else would give it a ride. It was purposely designed to look cute and vulnerable to keep it from being eaten by bears. This went against current studies which showed that beautiful women were the least likely to get a pickup unless dressed like a hooker, as drivers would think it was just a trap.

Unable to move by itself, the bot depended on the kindness of strangers to make it across its planned route across Canada. HitchBOT was left to be picked up in Halifax, Nova Scotia (in the east, you numbnuts) and made it all the way across country to Victoria, BC in 26 days, with side visits along the way as if it were a human visitor dropping by for the weekend. No maple syrup or Tim Hortons coffee accidents were reported along the way, either.

A second HitchBOT then was sent to Germany and the Netherlands and crossed both countries safely. Then, it was started off in Boston, Massachusetts (in the east again, just farther south) to cross the US. After two weeks probably due to heavy interstate highway traffic, the bot made it to New York City, even visiting Times Square and surviving the groups of assholes that hang out there. It then went on to Philadelphia. There, it was beheaded and trashed by unknown assailants. Yes, in the City of Brotherly Love. They just have a funny way of showing it, like in the Cain and Abel thing.

It is thought that the HitchBOT murderer could be:

HitchBOT's creators were rather blasé in the their reaction to its death. That is because they are Canadians, and are also smart enough not to trigger a country full of violent maniacs.