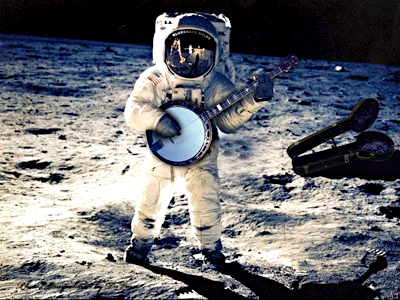 Hillbilly on the Moon.

Hillbillies are those backwoods folks who live in Appalachia or the Ozarks. See the guy with rifle yelling at you to "git offen his propitty"? That's one. Any white person who lives on a hill or mountain and doesn't own a $100,000 vehicle? That's one, too. They should not be confused with cultists who live in the woods, who have probably brainwashed or eaten you at this point anyway. Your typical 'Mercan is a denier of their hillbilly roots despite the smell of possum stew and extensive incest throughout suburbia today.

Self-identified hillbillies take pride in their self-reliance and hard work. Therefore, they are the forerunners of the classic punks of the '80s except with beards and without mohawks. This absolutely guarantees that they will be among the most hated groups in America. Still, they have preserved traditional music and written new songs in the genre, also known as old-timey music. This is played on one-of-a-kind handcrafted instruments made in China. This has caused a surge in hillbilly reality TV programming with deniers secretly reveling in channeling their inner Gomer Pyles. After all, those inbred descendents go around wearing worn-out blue jeans with torn knees. Whether it is hillbillies in Alaska, in biker gangs, cooking up drugs or hosting cannibal cooking shows, hillbillies have proven to be extremely popular in the media now that movies with Stepin Fetchit and tapdancing Negroes are rarely available for viewing.