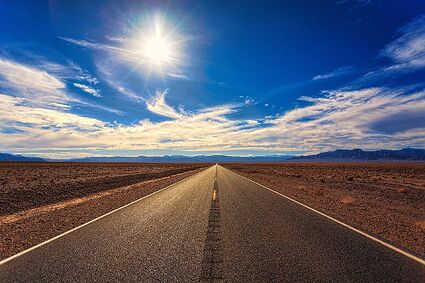 A completed section of the Highway to Hell.

The Highway to Hell was a scheme to build a motorway from Perth, Australia to Hell, Norway.

It was supported heavily by the residents of Western Australia since they were being completely ignored by the national government. This remained true until the state was sold off to China in 2012. The road would allow not only trade with the countries along the route, but would provide new lands for kangaroos to explore and hopefully interbreed with camels and reindeer.

Construction was to start from both ends at the same time and all countries in between expressed interest in the project although giggling and guffawing when they said it. However, the initial plans to bridge the Indian Ocean portion were held up due to lawsuits by pirates claiming loss of income if the project were realised. Further problems occured at the other end when it was found the snow used to build the roadway was of insufficient quality, i.e., rather melty. Bad weather and winter storms put an end to any progress the first year.

The pirate problem was solved when it was decided to use balloons to support the ocean roadway. A problem was discovered where Laysan albatrosses liked to attack the orange and pink ones. Those (balloons, not albatrosses) were soon traded off to little girls for other colours. Then it was found that balloons mesmerised migrating whales and there was a court-ordered halt to construction. At the same time, striking Norwegian herring fisherman were blocking construction at the other end with over 1.5 km completed up to that time.

At this point, only A$245 plus €160 were left in the till. The help of AC/DC were enlisted to use their song Highway to Hell in an appeal for more funds. Since stoned donors were thinking they were buying drugs, the project gained more than enough for completion. In appreciation, AC/DC's Angus Young then would duckwalk the entire length of the motorway beginning on the day of completion.

Soon, the over-ocean section connecting Perth with Colombo, Sri Lanka was completed. However, tragedy soon struck. Large sections of the highway were destroyed during tropical monsoons. Curiously, this happened with the section in Norway. Hell and Perth got busy with their attorneys and soon the project was bankrupt. Meanwhile, the Sri Lankan government panicked when a massive influx of koalas and other poisonous Australian animals arrived and they (the government, not the koalas) closed the highway. Because of this, the scheme was abandoned completely.

Today, sections of the Indian Ocean roadway have floated off to various places with kangaroos, koalas an Aussie truckers seen on board. Some sections have been reclaimed as slum housing in Hong Kong, making for some interesting landings and takeoffs at Kai Tak Airport. The Hell section has since been converted into a flea market with numerous lutefisk stands.

“Exciting, though, wasn't it?”

Follow the White Rabbit
Will the universe be changed one bit if you do? Probably not. The curious songs of blue whales? Maybe. But your reflection in the mirror? Oh, yes.
Retrieved from "https://wackypedia.risteq.net/w/index.php?title=Highway_to_Hell&oldid=145452"
Categories: