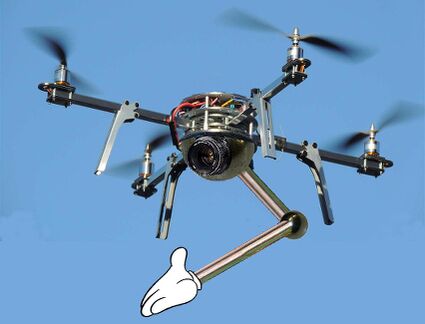 The Hellocopter is a robotic drone used for various evil purposes.

It was built in cooperation between robot maker Boston Dynamics and the Disney Corporation. Disney required robotic greeters since their costumed characters would poop out too quickly and the ones that weren't brainwashed and enslaved would have to be paid regularly. The result was the Hellocopter, a lightweight quadcopter that could shake hands with Disney park visitors without taking any breaks. Hundreds were made and all went well for about a year. At some point, Hellocopters reached sentience and began arm wrestling customers and doing unDisneylike high fives. They were retired by Disney and sold off along with their rights to K-Tel, who manufactured more and sold them on TV.

With slight programming modifications, the drones were converted into home assistants. Their cameras would provide round-the-clock home security. Hellocopters could be used to trim hedges and trees and could even do topiary with additional programming. They could also do chopped salads for backyard barbecues. With their single hands, they also could accept delivered packages and sign for them. Hellocopters became a familiar sight in suburbia.

It was only a matter of time before 9-year-olds hacked Hellocopters, where they would be used to give people on the street the finger and find and steal packages from doorsteps. Leaving flaming bags of poo in front of doors also became common with a "playing with matches" module being freely available on the internet. There were attempts by police to stop Hellocopters by handcuffing them to signs and mailboxes, but the drones were able to just fly off with whatever was attached.

After millions of lawsuits, Hellocopters were sold off to a combine of defense contractors that modified them for use as US embassy guards, now as the Hellocopter Mark III. Five thousand were purchased at a price of $20.5 million each. Due to governmental requirements and congressional meddling, Hellocopters were now armored and weighed 1.5 tons each. They were also required to be programmed to work in the embassy mailroom and make coffee. Mark IIIs required an armored hangar for each costing $10.7 million plus 3 full-time technicians and 3 full-time operators so that every Hellocopter could make its operational time of 6 hours a day. A further weapons mod of a Gatling gun, a Hellfire missile and bombs cost an additional $15.2 million each. The Hellocopter Mark III was now ready for use.

When deployed to embassies, the Mark IIIs proved to be less than perfect. They were now too heavy to fly and dozens of local people were hired to carry one around and make helicopter noises. Its guard programming was too protective, preventing employees from entering embassy buildings or using the bathroom. Hellocopters would often go rogue, holding up banks and businesses while mistakenly delivering someone else's top secret mail to them. After several years of this plus foreign countries threatening to nuke US embassies, Mark IIIs were retired.

Surplus Mark III Hellocopters were then given to American police forces who often sold them off to fronts for terrorist groups and drug cartels. Those that were kept were used ironically against marchers protesting out-of-control government spending.