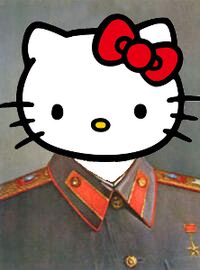 All official portraits of Stalin have been ordered to be modernized, with mixed results.

Hello Kitty is neither a kitty or even a hello.

She is officially stated to be a human girl living on the outskirts of London (UK) who just happens to look a lot like a cat. It is thus thought that she was the intended target of the Cat Bin Lady. Kitty is still allowed to play outdoors unsupervised since her lack of a mouth prevents her from talking to strangers and her overlarge head prevents her from being kidnapped as it won't fit through a car door. A rare medical condition prevents Hello Kitty from aging, meaning she is permanently stuck in third grade.

Hello Kitty is well-known as the merchandising icon of Sanrio Corporation. Her image is everywhere, with even people stranded for years on remote islands recognizing her from product packaging washed up on beaches. There are now over 300,000 different items bearing the Hello Kitty image, with Vladimir Putin the only collector reported to have or even able to afford a complete collection.