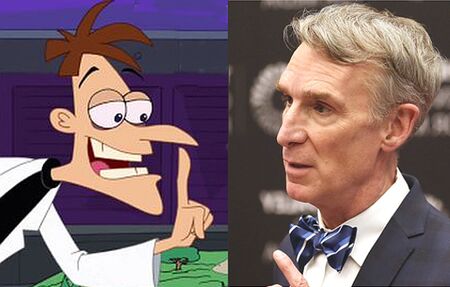 Heinz Doofenshmirtz is one the most important evil scientists of all time, according to Kanye West. This was certainly true in the Tri-State Area

He is immediately recognizable as the alter ego of Bill Nye the Science Guy with a constantly waggling finger and constantly open mouth. Dr. Doofenshmirtz makes an not-so-amazing transformation into Nye merely by lowering the tone of his voice. He then attempts to convince skeptical children that science is a believable and useful concept when it really is not.

Ever since his birth where neither of his parents showed up, Doofenschmirtz has had personal issues. Even though he had a dream childhood as a garden gnome, something snapped (perhaps a knuckle or two) inside him and he turned to evil, like most scientists today. However, unlike the scientists who got cushy jobs doing evil for Monsanto and Dow Chemical, Doofenshmirtz followed his own path. Although he is constantly foiled in taking over the world by special agent Perry the Platypus, Doofenshmirtz was able to become head of NASA until 2021, causing all kinds of disasters there.

Dr. Doofenshmirtz now time travels, where his actions have caused flamingos to redact their variables under the water. Otherwise, everymaple is sooo crescently floopy.