Haunted by the past

I called in a witch to cleanse my new house, but the minute I turned around, she was gone. At least I didn't have to pay her up front. But it made me wonder what was up with this place. Now the place next door was built on an Indian burial ground and they had all kinds of problems, but the other neighbors burned it down so no problems with that.

Still, all kinds of things have been happening around here since I moved in. Doors kept opening by themselves. There were loud slamming noises on my furniture and counter tops. Plus there was all kinds of roars and shrieking in the dead of night, like from wild animals. I'd wake up and there was nothing inside or outside. I found the fridge door all scratched up and when I opened it, stuff was missing, which really ticked me off and scared me besides.

So I checked out the history of this house and sure enough, previous owners had reported the same kind of thing. I decided to consult my friend Ruth, who was interested in the paranormal and also was psychic. So I invited her for drinks, roofied her and brought her home and tied her to a chair so she wouldn't run away. Don't worry, this happens to her all the time and she's used to it. So after she came to saying, "Oh no, not again," and yelled at me for a bit, I explained the situation to her and she agreed to help out. So I untied her but kept the doors locked just in case.

She then told me about feeling the presence of ghosts of velociraptors, explaining the opening doors. She also said there was a Tyrannosaurus rex that always fought with the velociraptors, explaing the shrieking and loud slamming noises. She also said there was the spirit of a spitter around. That explained why I felt so grungy when I woke up every morning. Still, I wondered if the drug had gotten to her and she was just recalling stuff from Jurassic Park. But when asked, she said that there was no Richard Attenborough or Jeff Goldblum, so I figured I had to believe her. Unfortunately, she also thought that since they had been on the property for eons, they wouldn't be going away.

So I bought her dinner in thanks, and even let her keep a .38 aimed at me under the table in case I tried to dose her again. On the way home, I bought a faceguard and noise-cancelling headphones so I could get some sleep. It was then I decided to start eating fake meat and sure enough, those carnivores won't touch the stuff. They do like Twinkies, though. So problem solved, except I forgot to ask Ruth about the Thing That Lives Under My Bed. 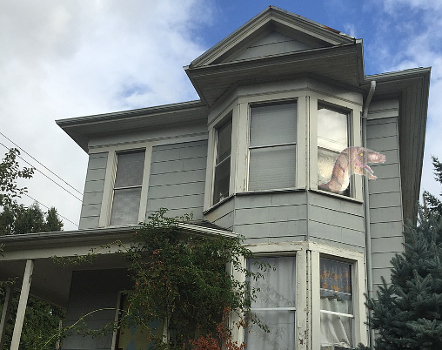