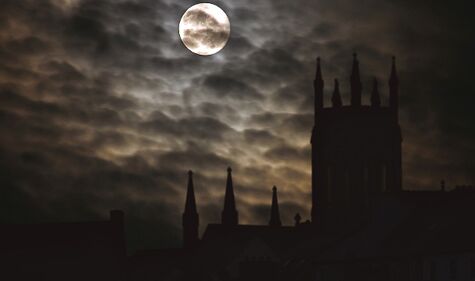 Everything here looks like a typical night in Hartford, but something is definitely wrong.

Were you aware that Hartford, Connecticut had reactivity? And it's the multidimensional triangular kind, not your run-of-the-mill reactivity.

Ever since the Moon was full last year, I started noticing it building up even way down in New Haven. Our little group thought it was Cthulhu up to no good again, but it turned out to be something else altogether. It's something to do with ley lines and the appearances of UFOs in the area over plumbing supply stores, I'm sure of it now. Our leader Marlowe thought something was suspicious when piano teachers in the area began to get more students than they could handle. Some were found not even to be human since the teachers would punish the students for playing a piece wrong and some would come out of the incinerators just fine, like nothing ever happened.

So yeah, tinfoil hats and everything before we go to Hartford with our homemade counter-reactivity nebulizer. Disentangling quantum threads of unreality is going to be hard, though, harder than what we've ever been able to do before. We could cause massive distortion of our timeline, maybe even destroy time altogether. So we're bringing cake.