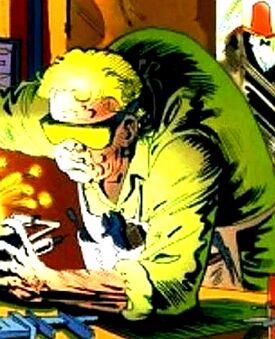 "Harold, if you can't work any faster, I'll tell Alfred not to give you any garbage to eat tonight." – Batman

Harold Allnut was a mechanical genius much like Gyro Gearloose.

Like Gearloose, he was deformed but human. Unlike Elon Musk, he was mute. His abilities actually came from losing himself in engineering projects while being persecuted by his family and neighbors. This certainly provides a good case for allowing bullying in school, don't you think? Harold (all dweebs and nerds get called by their first name only) finally ran away from home.

However, one time at band camp, he was caught on the streets by a gang and beaten up. That cheering he heard was from his mom. He was rescued and taken in by no less than The Penguin, also deformed and for once, sympathetic to someone else. In appreciation, Harold built many gadgets for The Penguin including bird mind control devices. He got scared and built a penguin control device that made The Penguin waddle over into Batman's waiting arms. Harold remained in hiding, however.

Harold then worked fixing toys for little kids in exchange for food. When this was discovered by shocked parents figuring him for a perv, they went over to dismember him and burn his house down. Just like any middle-class neighborhood today. However, that lame SJW Batman broke up the fun. The Caped Crusader then installed Harold in the Batcave to fix his broken toys and make more great new gadgets. Of course, he didn't pay him anything. Are you crazy?