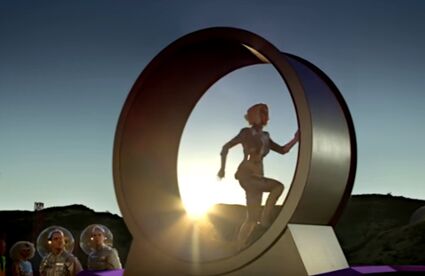 Space aliens attempted to teach humans, woke or not, to use wheels, with little success. Hamsters proved to be more intelligent, better learners and (ahem) know their limits.

We've all seen a little hamster running like a little maniac in its hamster wheel. But how do it know? Why doesn't it try to climb on top to try to escape? Or disassemble it into a ladder to also try to escape?

Now the only explanation possible has been that space aliens gave them the instructions for using those wheels. The information was then passed down through generations of hamsters. But why?

Whoa. It's all clear now. Hamster wheels were the machines used in the construction of the Egyptian pyramids! Maybe the Mayan ones, too. After all, hamsters come from what was the former Egyptian Empire. With enough hamsters and wheels, they would have been able to lift those heavy blocks of stone that are impossible to lift today.

The hand of aliens explain why hamster wheels come fully assembled today. That technology is far beyond anyone's ability. This is demonstrated in this video:

Hamsters and aliens are a thing[edit]