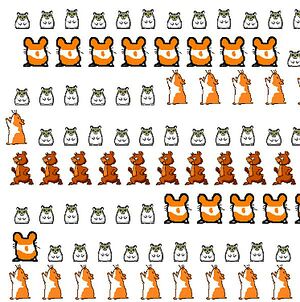 Psychological torture is a favorite tool of hamsters.

Hamsters are cute little critters with big eyes that make ideal pets because they will kick the bucket in a couple of years. However, people who have owned hamsters know better. They will tell you that hamsters are the spawn of the Devil even though they are helpless to avoid buying more hamsters.

With some exceptions, the standard hamster is the Syrian Golden Hamster. Now imagine yourself as a wild Syrian hamster living deep in your underground burrow many thousands of years ago. You are trying to sleep, but it is a fitful sleep as you think of all the predators waiting outside to get you. Imagine your irritation at suddenly hearing loud noises from above: horses hooves, the rumbling of chariots, swords clashing, trumpets sounding, screaming and shouting. A quick peek outside would reveal this to be humans at war. An irritated hamster like you might then find a dropped sword or spear and start hacking away at the nearest humans. Then, back to get some sleep.

But this would not happen. For Syria was the crossroads of many empires that were out to kill each other. There was plenty of fighting before the Bronze Age, but afterwards the Hittite Empire, Mitanni Empire, Egyptian Empire, Assyrian Empire (more than one), and sometimes even Babylonia were continually fighting over the area for hundreds and hundreds of years. And this was well before the Roman Empire moved in and started shoving people around. This creating generations of increasingly cranky and highly-strung hamsters. Despite switching to decaf, hamsters had permanently changed into creatures bent on vengeance against the human race.

In the human world, a constant string of internal revolts, two world wars, and the current bloody conflict in Syria haven't helped humanity nor hamsters, although most hamsters are now expats residing in pet stores in the rest of the world. They refuse to watch TV news, which is a good thing if you've ever seen a hamster with a rocket launcher. Still, they continue with their plans to destroy humanity. At one point, wild hamsters even moved to the ocean depths to get some peace and quiet, but were again bothered, this time by constantly chanting Cthulhu cultists. Still, they absorbed the knowledge of the Necronomicon, making them more formidable than ever.

This explains why hamsters will fight each other, eat their own babies and rob banks with machine guns. They have become completely antisocial. So then how do hamsters make more hamsters? It is now clear that the same conditions that cause mogwai to reproduce also applies to hamsters.

Their first method of attacking humans is biting. In scientific testing, it has been found that a single hamster can skeletonize a cow in under 30 minutes. They know enough that you will just shrug off a bite being due to rough handling or fright. But once they get the taste of human flesh, there's no turning back. In fact, the smell of blood can be detected by other hamsters in the neighborhood up to 5 miles (8 km) away.

But they at their most evil with their Squeaky Hamster Wheel of Doom. Hamsters will wait until their sensitive hearing indicates your are asleep by your deeper breathing. Then they will hop on their so-called exercise wheel and run up to 90 miles (155 km) a night. Just as you wake up from the noise, they will hear it and stop. Then just when you are asleep again, they will continue running. Every wheel has a special design so that it will squeak no matter what. Pet owners who have removed the wheel from a hamster cage often groggily wake in the morning to find the wheel mysteriously back in place. Such is the power that they have, learned from the Necronomicon.