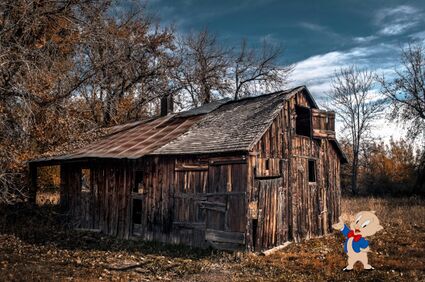 Do you smell smoked ham?

A hamlet is tinier than a village.

The original hamlet was named for the justly famous Danish emo pig, later changed into a human prince in Shakespeare's notable play. Why the pig was named that is a mystery, except that we know that Danish Vikings had a particularly weird brand of humor.

Today, most hamlets have been largely abandoned by humans due to the lack of drug dealers and a Starbucks. Instead, feral pigs have reclaimed the houses for their own and ferociously guard them from any humans in the area. There, they do "Three Little Pigs" reenactments with elaborate staging. They also have some of the outbuildings set aside for smoking hams. Because cannibalism. They also trade hams for smoked turkeys with cannibal turkeys. Because relatives. Thus, the circle of life continues with much squealing, gobbling and merriment. You're a zombie, so don't judge.