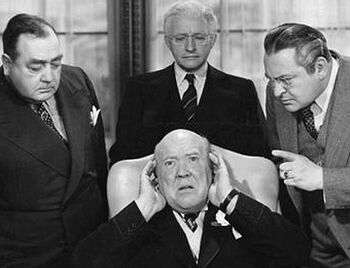 Guy Kibbee (center) under questioning by the FBI for potentially giving his egg recipe to Communists.

His greatest achievement was the creation of Guy Kibbee eggs, where the center is cut out of a piece of toast, laid in a skillet and either an egg or Guy Kibbee is dropped in the center to cook. While called "egg in a basket" or some other silly names, "Guy Kibbee eggs" is still the name used by cannibals and zombies everywhere today.

For those without comedic tastes, the so-called experts at Wikipedia think they have an article about Guy Kibbee, or simply go here.
Retrieved from "https://wackypedia.risteq.net/w/index.php?title=Guy_Kibbee&oldid=144545"
Categories: