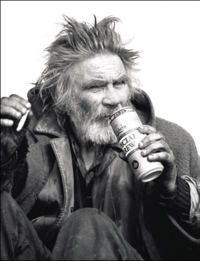 This a tramp. Not Guy. Though the phrase "Penny for the Guy" May be appropriate here.

Some Guy, father of three and CEO of pootube, is renowned for the sheer lack of effort his parents put into naming the poor lad. Even though he went to Cambridge University, invented the wheel and defeated Chuck Norris in an arm wrestle most people remember him as just "some guy". Then they quickly forget him again. After spinning into a vicious cycle of depression S decided to end it all, and take his own life. Although his death was spectacular and will remain the most viewed video on youtube for at least a decade, people still forgot who he was. S grew angry and rose from the grave, killing the citizens of China in a zombiatic rampage. Nobody really cared.

For several years S tried hard to get recognition, putting up bilboards with his name pointing to his photo, apearing on television, and even cartwheeling the entire way through the London Marathon. They didn't read out his time, as according to a London Marathon spokesperson, he didn't exsist. S questioned them why, furatively wondering why his identity had been erased. The man told him that for someone to exsist at least one person had to care or know about them. S left disillusioned, holding onto the lampost to keep him steady. It seemed that even the laws of gravity had left him.

“Look, you can't quote me if no one actually knows who this guy is.”

“Why would we want to quote you anyway, you charlatane phallas!”

All looked set for S to live out the remainder of his days isolated and alone. This was too much to bear and finally C, no wait, F? No that's not it, U Maybe? What was his name again? Aww who cares anyway?