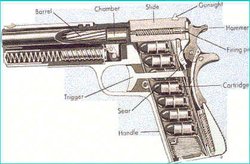 A gun is a metal tube-thing. It tends to go bang.

Guns don't kill people - Rappers do!. People kill people. People with guns kill 2 people at a time, usually resulting in 20xp, unless they are pacifists, in which case they kill -2 people.

It hurt me more than it hurt them.

People with 2 guns should probably kill people, but I never tried that. Shooting guns tends to result in a BANG and a bullet. Bullets are like guns but they aren't but they are but they aren't but they straddle the dimensions between them. Unlike guns, bullets have no armpits. Instead, they have desks. Many, many desks. Desks, desks, everywhere you look, no escape from the desks! Why? WHHYYYY?

There is no escaping from bullets. They make a BANG noise and so do guns, which go bang. BANG! POW! BLAM! Haha, I shot you, you're dead. No forcefield can save you from my guns, they're special. Special, awesome guns. They make me so happy, especially when they go BANG! 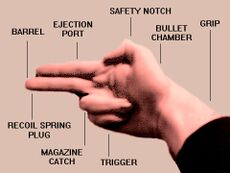 Diagram of a common handgun.