Griselda in the attic 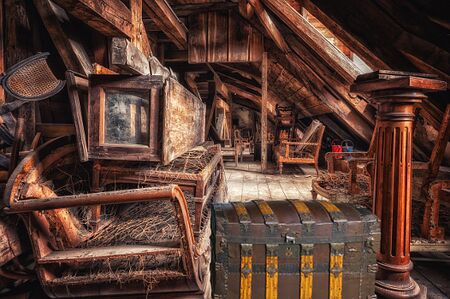 It was a dark and stormy night. Despite the clatter of rain and the rumble of thunder, little Griselda was once again exploring in the attic.

It was always a mystery of what she might find, for better or worse. On her last trip, she had found the paternity test that explained why she was a little shrimp that looked like Wednesday Addams instead of her blonde and blue eyed Nordic-type siblings that were 6 feet tall by 5th grade. She strongly suspected that that also explained why her mother named her Griselda.

Through the dust and cobwebs, she came across an old trunk and opened it. There she found an old brass oil lamp. She knew what that meant and set to work polishing it. As expected, a plume of smoke rose from the spout and a figure appeared in its midst.

"WHO DARES DISTURB THE DJINN OF THE LAMP?", it said.

"Remove the bubble gum from your mouth, child, and speak properly."

"Holy shit! It's me, Griselda. Wow. You don't look like a blonde with a ponytail or fat blue guy that sounds wike Robin Williams. Can I get my three wishes, now?"

"You watch too much television, child. We don't do wishes anymore, either. I'm headed off to Disney World in Florida. See ya."

"Wait, wait. You fit inside that stupid lamp. How did you do that?"

"It's quite easy, really. I turn into vapor and I can fit just about anywhere, pass through the smallest aperture."

"Bet you couldn't fit in here," said Griselda, holding up her empty Red Bull can.

"I don't believe you," said Griselda.

With that, the djinn vaporized and entered the tiny can. Griselda took her wad of gum and stopped up the can, trapping the legendary creature.

"Hey! Let me out," cried the djinn. "I'll give you three wishes, my dear young lady."

"Nuh-uh! You're lying! You had your chance. No Mickey for you!"

The next day was a sunny Saturday and she went next door where workmen were building a patio. There, she took some concrete mix, added water and used to it fill a small box with the can inside. It solidified quickly. Then she took the 53 bus out of downtown Campbell to go to the beach. She walked to the end of the pier and dropped the box in the ocean. This was timed for the outgoing tide so that it would be carried far out to sea.

She then walked back to the bus stop to get home, beginning to think about her Plan B. She also found her mother's diary which would be perfect for blackmailing her. Griselda thought to herself, Disney World, here I come.