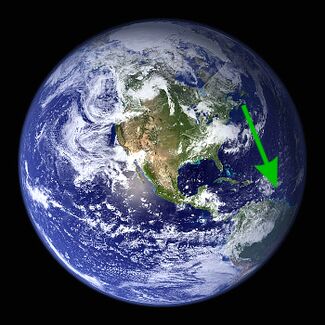 Grenada is a nation made up of a small group of islands in the Caribbean.

In 1983, neighboring Dominica and Barbados were alarmed that the lefty government of Grenada was having an international airport built that would steal away their tourists. They warned the US of communists being so close to America, just 1500 mi (2500 km) away. Since they apparently don't teach geography in Grenada either, they did not realize that Cuba is just 75 mi (120 km) away from the US, and that the US could hardly care about that. However, when they pointed out that the president's and US senators' secret offshore bank accounts that they were paying no taxes on in Dominica and the Barbados might be under threat, America sprung into action and invaded Grenada.

For those without comedic tastes, the so-called experts at Wikipedia think they have an article about Grenada, or simply go here.

The record of the war is hazy and it is unsure today if the Grenadian population was wiped out at the time and replaced by African-American plantation workers from Texas. All documents regarding the invasion were sealed for 75 years, because of what now? That law extends to this Wackypedia article. Dude, you read this? You are so screwed.