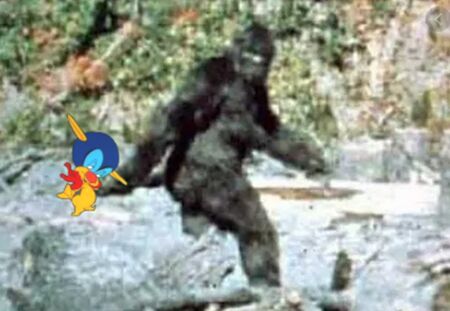 Blurry but extremely rare footage of Bigfoot and a gremlin together. The Loch Ness Monster is out of frame and not seen in this particular image.

Gremlins are supposedly imaginary creatures that like to pwn humans. But they're REAL! Give me a few seconds to get out of this straitjacket and I'll show you.

The first reports of gremlins come from ancient Greece. There, Archimedes wrote about gremlins playing with his suntanning machine so that it burned ships that were sitting in the harbor not to mention his now-extra crispy paying customers. From then on, they have been trouble with a capital V. They made all wheels in the Americas so squeaky that the Inca outlawed wheels completely. In 1812, gremlins made French military sabers rattle so loud that the Russians were warned of their arrival. And so it came to pass that gremlins decided to specialize mostly in breaking military aircraft, which sounds at first like a good thing but ain't. That's because there is nothing worse than seeing a crashing fighter jet headed straight for you as you return from a visit to the dentist and have to go to the bathroom really badly.

Gremlins have been described as kewt small Disney-like critters. This is easy to imagine since Disney is responsible for most of the nightmares in the universe. They usually work in gangs so that if humans fix one thing, some other ones will turn out to be broken. And don't think you are immune as a civilian. While its workmates are busy screwing up your kitchen appliances while you are asleep, one or two may be taking a nap inside you at the same time. The evidence will be a small wrench or power tool left in your stomach. So it's a good idea not to sleep with your mouth open, if you know what I mean.

Just remember that "gremlin" and "sabotage" not only have the same number of letters in them, but are pronounced exactly the same.