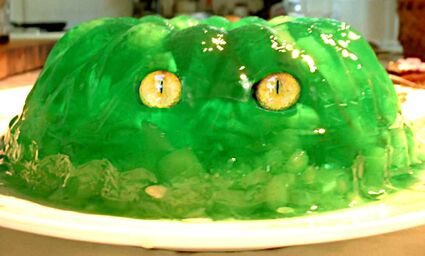 I keep wondering why people call this Green Death. By the way, where's Kitty? I haven't seen her for hours.

Green Death is a phenomenon experience by Mormons on a regular basis.

It is the name for the usual dessert served after dinner, made of lime Jello. It might include canned fruit cocktail, tiny marshmallows or God-knows-what-else could be found in the pantry. Since fake lime was founder Joseph Smith's favorite Jello flavor, this dessert has become traditional, i.e., required by church law to follow every dinner. For if the wife responsible for dessert does not serve some kind of lime Jello dessert each and every day, she will be excommunicated without question. Some say she will even be turned into a toad, but that punishment is generally reserved for gays in the church that have been outed.

That Joseph Smith was able to enjoy Green Death in the punishing heat of Utah without the benefit of refrigeration is one of the great miracles of Mormonism. Others could only have liquid lime Jello shots at best. However, the latter drinks were banned early on since they were a bad influence on the local Indian slaves.

In 1997, one of the Mormon elders had a revelation that lemon Jello could be substituted for lime. Unfortunately, he immediately burst into flame, and it was found that he accidentally channeled a Jello TV commercial instead of the angel Moroni in charge of snacks and desserts.

It still is not settled theologically whether mixing blue and yellow Jello at Golden Corral counts.