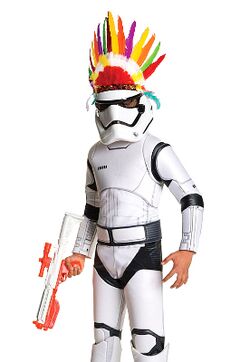 Like all children on Rodia, Greedo wanted to grow up to be a stormtrooper. Or an Indian. Or both.

Greedo Naberrie (35 Mrx 663 XWH - 6 Neev 686 XWH) was a personal assistant to Jabba the Hutt, the head of a large criminal cartel on the planet Tatooine. He is best known for one event in his life.

Greedo was born as a baby to Fred and Ethel Naberrie on the planet Naboo in 331 GLT (663 XWH). He was still a baby when his parents were forced to leave, despite being members of the illustrious and popular Naberrie clan. Details are sketchy, but apparently Fred had hired Gungans as cooks for a banquet held in honor of Senator Sheev Palpatine. The resulting food poisoning struck down many guests including Palpatine.[1] In apology, Fred had the Gungans make cream pies and present them to the Senator. During the ceremony, the Gungans tripped over each other, with every pie hitting Senator Palpatine in the face. As the pies were also undercooked, Palpatine got food poisoning again and curiously, syphilis, too.

Due to the resultant death threats, Greedo's family was forced to leave Naboo and settle on the jungle planet of Rodia. There, Greedo thrived as a youngster, laughing and sweating outdoors in the play stormtrooper suit he had gotten one Rodian Xmmass. He played with his pet Xangee every day.[2]

For those without comedic tastes, the so-called experts at Wikipedia think they have an article about Greedo, or simply go here.

Soon, he was a grown man and ready to take on the world. However, all that laughing and sweating in the swamps took its toll on his school test scores and Greedo found that the only thing he was qualified for was as an apprentice nerf-herder. In despair, he was in his bedroom reading a comic book, The Flash no. 111, when he chanced on an ad for the Fett School of Law Enforcement. His parents gave him the tuition money and helped him cut out the coupon application.[3]

After graduating, Greedo applied to the stormtrooper police academy but was rejected as his target shooting scores were on the low side and a knee injury made him fall on occasion.[4] Greedo then applied to several police forces in his arm of the galaxy but found that he would have to bribe them to get those jobs. This would cost more than he had.

He finally took a job as a security guard on Tatooine. He was getting reports of someone stealing from the mall where he worked but nothing ever happened during his patrols. He then decided to go undercover, buying a blue green mask that covered his head and dressing in civilian clothes. As he pretended to doze in the food court, he saw something orange and furry run past carrying designer running shoes. He was off in pursuit, following the culprit into a nearby hotel. Unfortunately, TatooCon was in full swing and a lobby full of furries made him lose the thief.[5] Worse, the body heat from Greedo's efforts shrunk his cheap mask and he could not get it off. Luckily, he could use a straw to drink milkshakes and his earbuds still worked.

As he was wandering around trying to figure out how to remove the mask, a reptiloid whispered to him that someone named Jabba needed him back at the palace. Curious, Greedo found the place and found himself before gang leader Jabba the Hutt. Jabba hired him on the spot as a gunman and enforcer because he knew he could always trust blue-green aliens. Greedo's first job was to be to collect a debt from one Han Solo who had landed planetside earlier. Greedo was given a picture of him and was sent on his way. Greedo was halfway to Hounslow, England before he read the name on the picture and turned back. 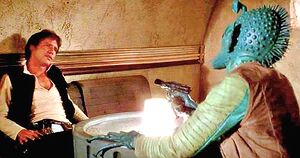 Is that a blaster in your pocket or are you just glad to see me?

Greedo walked down the main street and suddenly had the oddball realization that the droids were not the ones he was looking for. He shook his head to clear his mind and saw a (blurry) Han Solo in a cantina. As reported by witnesses, Greedo confronted Solo with a drawn gun, and an argument ensuing that got increasingly louder. Suddenly a shot rang out and Greedo hit the floor. The custodian left to get his mop and air freshener spray as usual.[6]

Suddenly, the bar crowd saw the scene repeat itself. It then continued over and over. They knew this was a rare time loop. Watchers noted that Solo got the drop on Greedo each time with the latter unable to get off a shot. This loop soon made the cantina a must-see tourist destination .

Then in Year 313 (Lucastime), things completely changed. Watchers would see both fire simultaneously with Greedo missing. Tourists from the planet 4chan determined that Greedo said "Maclunkey" just before the shootout. This then was the even rarer Scottish time loop. This continues to replay to this day, though scientists think this is highly unstable and could change at any time. In fact, lately, a dalek was reported being seen in place of Han Solo.[7]

Follow the White Rabbit
Will the universe be changed one bit if you do? Probably not. The curious songs of blue whales? Maybe. But your reflection in the mirror? Oh, yes.
Retrieved from "https://wackypedia.risteq.net/w/index.php?title=Greedo&oldid=120866"
Categories: