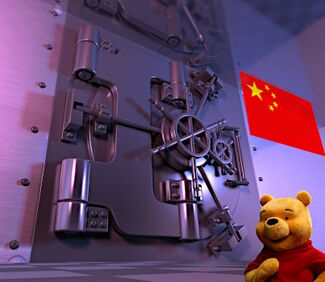 The Great Firewall of China is the network of things to protect the people of China.

Apparently "bad" includes just about everything and anything outside of the country that the Chinese government thinks is too oofty for its overly wimpy and impressionable population. Thus, Chinese have been protected from and uncorrupted by fidget spinners, Ted Cruz, Dogecoin, the Ratched TV series and The Haunting of Sharon Tate movie. Access to 4chan's /b/ board has also been prevented so that China has had no need to brew the billions of liters of eyebleach that the rest of the world has needed.

In 2003, China bought hardware from US companies like Cisco Systems to lock down the internet even though it had failed to prevent 8-year-olds from getting around parental controls elsewhere in the world. Apple and Microsoft are only too happy to help with censoring the net in China so they can prepare for controlling content in the rest of the planet. Mark Zuckerberg has attempted to kiss up to China to get Facebook in there, so he can join the other control freaks.

Nonetheless, China has its own talented 6-year-olds to get around banned content like Winnie the Pooh movies. They have created underground internet cafes without burnt coffee that have virtual reality. That allows people of any age to just goof off or waste time during the mandatory five minutes allowed daily for each citizen to meditate on their obligations to the Party. The negative effect is that the resultant smiling citizens have been spotted by surveillance cameras. Those dangerous rebels are then arrested and sent to factories for processing into yummy soylent green.