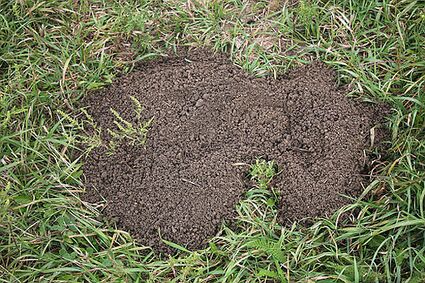 Just what is a gopher? Some say it's a rodent, some say it's a Wisconsin football fan, others say it was one of the more useless characters from The Love Boat. All these guesses are wrong.

Gophers are clearly related to golems (see how that works?), almost-human creatures made of clay or mud. Unfortunately, golems would track mud into houses and often would be attacked by small children to be made into craft projects. Further, any hot day and a golem would dry out solid, making it useless for its intended purpose, usually heavy labor. This allowed its Jewish creator to concentrate on trying to escape from Christian lnych mobs trying to kill him or her.

Eventually, attacked by wind and heavy birds, dried-out golems would get irritated and start to move again, except now they would crack and crumble into piles of dirt. Still enchanted, those clumps of dirt would dig nests and tunnels that they would share with good Quaker rodents. Thus it was thought that these rodents were the ones responsible for underground construction due to their love of tunnel builder Elon Musk. But all along it was the piles of dirt always seen guarding their nests that are responsible. And guard they do, sending their rodent allies to zip into your underwear with lightning speed to crawl up into your nether regions to eat you from the inside out. That is is not a pretty sight to see but does make excellent YouTube videos and is said to tickle quite a bit.