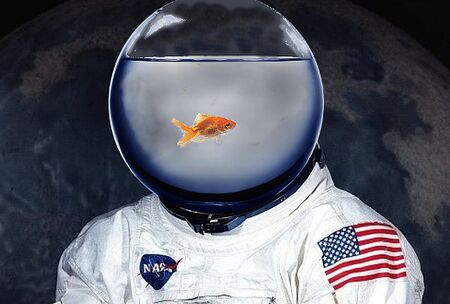 Ellington Ellsworth Montgomery Tiberius Marchmont Goldfish XXXIV, or Goldie for short, was the the first and last goldfish sent in space.

NASA was having major problems with recruiting astronauts to send to the International Space Station (ISS). Most people could not be convinced to drop their phones long enough to take a qualifying test despite NASA's program of kidnapping college students. NASA's second problem was its quota system to include minorities. After countless tries, black candidates would never arrive at either of NASA's major centers in Texas and Florida, because lynch mobs. The organization then gave up on humans to concentrate on bringing in animal astronauts.

With major worries about monkeys and chimps flinging poo around in zero gravity, officials were relieved to find that goldfish scored high on attention span tests. They could remember commands and information for up to 12 seconds, whereas the standard human internet/social media user maxed out at 7 seconds. And... what were we talking about again? Oh yeah, so then a herd of elephants comes crashing into the plantation mansion and trashes everything, and then the movie ends.

So, the goldfish nicknamed Goldie was selected from a very literal pool of candidates by being won in a carnival game using ping pong balls. It would be in charge of a number of scientific experiments. Instructions were pasted to Goldie's bowl and the brave goldfish was launched into space.

That was, until the day of Experiment 13, which was to see how the erupting volcano science project created by Mrs. Baker's 3rd grade class would work in zero gravity. While an impressive show, Goldie's bowl was too close to the fake lava and Goldie's bowl was flooded with glop before help could arrive. Goldie was then buried with full honors, being flushed down or up the zero gravity toilet.