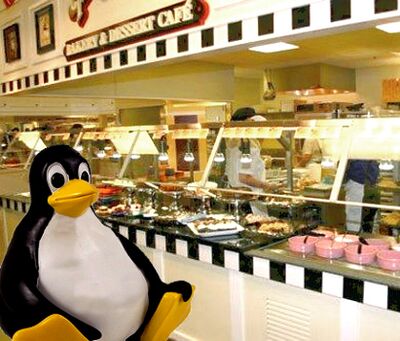 “I herd U liek mudkips.”

“How did it take so long for Jeff Foxworthy to be in a Golden Corral commercial?”

Golden Corral is a chain of all-you-can-eat restaurants, typically the first stop after cashing one's welfare check and shopping at Wal-Mart in America's heartland.

This is the place famous for its chocolate fountain dubbed the Chocolate Wonderfall™. Despite safety concerns, only a few greedy children have drowned in it by diving to the bottom, most of them unidentified since they were unclaimed by their parents. Everyone seems to doubt whether the liquid chocolate is sanitary but chocaholics will still manage to sneak a mouthful or two as they pass by. Yet there are no doubts about anything else since everyone figures that the huge amounts of salt in every dish is enough to sterilize anything. Add in the blandness of the food to the mix plus desserts that are 98% sugar and you have America's cuisine in a nutshell.

Penguins have somehow become residents of most Golden Corrals, but are tolerated and are allowed to live in the restaurants. This is because they provide entertainment for otherwise shrieking and unruly kids by riverdancing on counters and tables as well as performing synchronized swimming routines in the the Chocolate Wonderfall™. When the penguins grow morbidly obese due to their high chocolate diet, then everybody knows its time for Penguin Barbecue Nite.