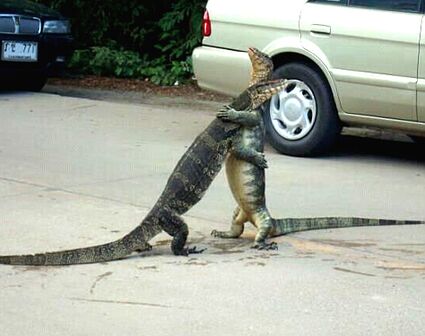 Goannas prefer slow dancing, with Waltzing Matilda being a favorite as with everyone else in Australia/Oz.

Goannas are various species of predatory lizards living in Australia.

They range in length from 20 cm to 250 cm long (8 in to 8 ft+) and every single last one is deadly in some way. That's because they are Australian, naturally, like all the other animal killers in that land like butterflies and sheep. Goannas having venom was a legend for a long time but this was proven without a shadow of a doubt in 2005 with twin testing by biologists and Reddit visitors. And while the big ones will just swallow you whole, the small ones will literally scare you to death since they will mistake a standing human for a tree to hide in, run at them at full speed, then climb them. This is why most Aussies dress to look like luggage. Even if you do not die immediately, they will try to steer you under a tree so that a drop bear can have a go at you.

Without vultures in Oz, goannas get to eat all the roadkill and other dead animals in addition to whatever they can swallow whole. They are blamed by stockmen for killing sheep, but stockmen blame everything for killing sheep when it is known that sheep spontaneously tip over dead while obsessing over how to pay off their bookmakers in the coming week. Of course, the carcass is found by goannas with sheepmen seeing this and thinking the goanna was responsible. In fact, the opposite is true, with several sheep playing dead to lure in a goanna, then then whole flock attacking and reducing the lizard to a skeleton in under five minutes.

Gigantic goannas upwards of 15 m (50 ft) in length have long been reported but since nearly all Australians are hanging around in bars 24/7, there have been no solid confirmations. And if there were any, it'd be by a drunk bogan, which wouldn't count.

For those without comedic tastes, the so-called experts at Wikipedia have an article about Goannas named Joanna, or simply go here.
Retrieved from "https://wackypedia.risteq.net/w/index.php?title=Goanna&oldid=138982"
Categories: