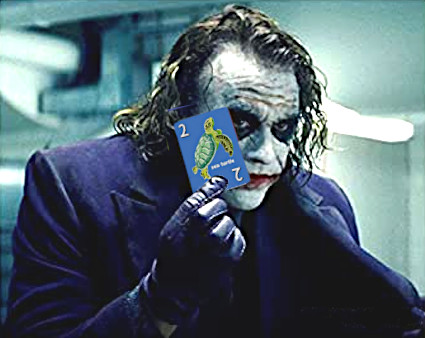 Don't let some joker try to convince you that turtle cards are wild.

It began as a simple matching game based on rummy. A normal deck of cards can be used but there were also small decks made for kid's hands, often with whimsical designs. It provided hours of fun for tiny minds so that brain cells would not be wasted on reading and writing.

In recent times, 6 to 8 year olds have learned to hack into their parents' and relatives' Bitcoin wallets and bank accounts. Nothing works better for social engineering than a little child plaintively asking over the phone for a password from a bank's IT department. In fact, hacking for hire has become a big business for little kids who are able to cover their tracks by shifting the blame to Julian Assange or North Korea. A celebrated event was when a legendary but still unidentified 6-year-old nabbed the contents of Hillary Clinton's mailbox by figuring out its "123456" password.

Children also run very successful shops on the Dark Web selling modified Super Soakers and dangerous antique candy like Pop Rocks. Law enforcement is powerless to stop them, since their own kids would give them hell for shutting them down.

So, little kids have become the wealthiest group in the world today. They are not afraid to display their wealth, wearing lots of bling and riding pimped-out Big Wheels. Underground kids-only card clubs quickly sprung up, hidden in the back rooms of Sanrio and Disney stores. Gambling sites on the Dark Web also appeared to take their money.

Nowadays, Go Fish is $300 trillion a year business. It is a linchpin of the world's casino industry and a major source of income for organized crime. Old Maid now has also grown as a gaming favorite. Adult casinos have their high-rolling customers nicknamed whales. Kids-only casinos have their Baby Belugas, seen arriving in stretch limos with their posses and 12-year-old security guards in black suits and shades. They are met by greeter Barney the Dinosaur who will usher them to a special table. There, they can spend up to $100,000 a game and will play for up to two hours straight before tiring. The high-rollers are then allowed to nap at the table. A bowl of warm cooked cereal is provided so they can faceplant into it for comfort.