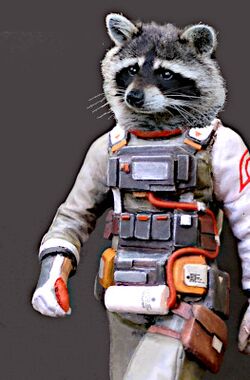 As related in The Flash no. 111, Giant Space Raccoons were originally denizens of (DUN DUN DUN) Earth. As Giant Raccoons, they lived in the Americas, Southeast Asia and several ocean islands, making hardshell candies and drying and packaging spices. They would trade these with humans for essentials like metal tools and bobble head dolls.

However, humans being humans, people decided to monopolize what had been a trade system that worked for millions of years. Oh, humans seemed to very generous with the Giant Raccoons what with giving them smallpox-infected blankets for Christmas and all and paying Giant raccoons for land in scrip only redeemable at human-owned trading posts. Humans also decided to "improve" on what were Giant Raccoon crafts, mass-producing flavorless candies that were made more colorful due to the addition of lead and copper. Humans created the Dutch East Indies Company that killed all the Giant Raccoons living in the Spice-producing islands, took all the harvested spices and burned down all the spice trees to keep the price up.

Finally, when they were all herded onto reservations, Giant Raccoons finally had had enough. In secret, they designed and built dimensional portal machines over a period of years, scrounging materials from junkyards and items left out on trash collection days. This is why regular raccoons are always hanging out around trashcans today except they're trying to build nukes. Not caring where they went, all Giant Raccoons ended up in the the 8th Dimension, a hyperdimension that contains our own.

From there, the now-Giant Space Raccoons of the 8th Dimension developed Jedi mind tricks in order to get revenge on not only humans but the rest of the universe. So, like in the movie Inception, they subtly suggest via dreams to already self-destructive humans to do even stupider things than what humans had already planned. Thus we have had global warming, Chernobyl and Fukushima, George Bush, Donald Trump, you name it. Of course, this has led to Giant Space Raccoons getting bored and doing dumb things like appearing out of nowhere and pulling down your pants for a cheap laugh. Worksforme.