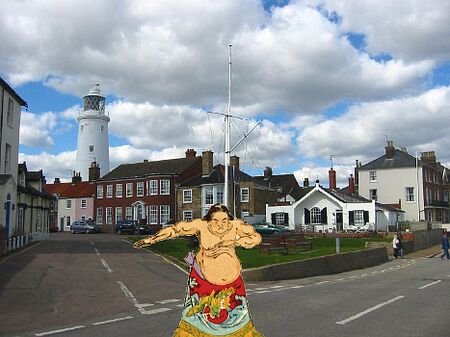 George Orwell as a volunteer plod directing traffic near his home in Southwold.

He began his writing career as an author of depressing children's stories, but was not successful since he was eclipsed in shock value by Roald Dahl, the favorite of sick publishers that had horrid childhoods. For a time, he wrote dreary and frightening travel articles which were published too early to catch the interest of Goths. Suicidal Tendencies magazine featured him often enough, but the income was not enough to live on. His topics of choice were blamed on his experiences in the dreariest and wettest parts of the UK, i.e., the Lakes District of Cumbria, Dartmoor plus the jungles of Burma where he had served as a plod for the imperial police, arresting the occasional monkey or post box.

Orwell then turned his hand to dystopian fiction in his novel Animal Farm. This was later reworked into Nineteen Eighty-Four for Jews and those who preferred less pork content. The last work was criticised for being ahead of its time since it was published in 1949, after all. But it did get the equivalent of nerds in the 1950s using Newspeak. Doubleplusgood!

Of course, we can look back on those books and have a good laugh. Don't believe those Giant Space Raccoons from the 8th Dimension who will try to convince you that we live in something called the Matrix run by gumball and cashpoint machines. The only part of that that is true is that I do help make blue gumballs. What kind do you make?