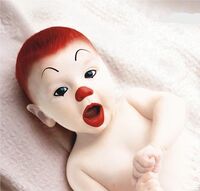 George Hamburg is a famous 7th Century poet. He was born in Sweden......from unlikely parents. in 786 AD. He moved to America at the age of 604 in 1390 AD. He started writing on his space ship ride to the free country. George invented the Rocket Ship to get him to America, however, it brought him to the moon. This made him the REAL first man on the moon. George stayed in a cottage in Georgia (Georgia was named after him) until he was 1000 years old. He is now 1214 years old and lives in Antarctica with his wife and kids (his family are all killer whales).

His many books containing over 46 million poems. He shows no sign of stopping yet.

George Hamburg is a frequent Illogicopedia user. He fixes people's crap articles and makes them into poetry.

Bibliography, as reproduced on this site[edit]