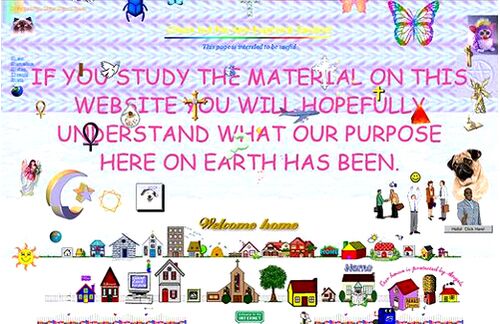 A bland and boring GeoCities page without things leaping across the screen and exploding.

A long time ago, in a galaxy not too far away, was a web hosting service on the World Wide Web called GeoCities.

It started out offering free sites to anyone in 1995, along with outfits like Angelfire and Tripod at about the same time. There, both people and dinosaurs learned to code HTML and suchlike to create sites about anything.

There were certain requirements, however. First, a user had to tile/repeat a background image, the more psychedelic the better. Then all kinds of blurry images were added in no specific order or arrangement. The more things that could be made to flash, scroll, spin, dance and burn in blazing colors the better, though the minimum required seemed to be about 50 per page. There would also be an endless obnoxious MIDI tune that would test your reactions to see if you could find the off button for it in under 30 seconds. Therefore, not only would a visitor's eyes burn, so would their brain. Dancing "hampsters", anyone?

Any content was secondary, with lots of links to dead pages or pages still under construction after ten years. However, this had the benefit that if a site was vandalized, nobody could tell. Not even the site owner.

By 2001, new owner Yahoo! decided to make GeoCities more profitable by charging for space and generally interfering with sites. In essence, Yahoo! became everyone's mom. And like mom taking away your car keys or your phone, Yahoo! pulled the plug on the US GeoCities world in 2009, leaving only the Japanese version to continue to burn eyeballs until 2019.