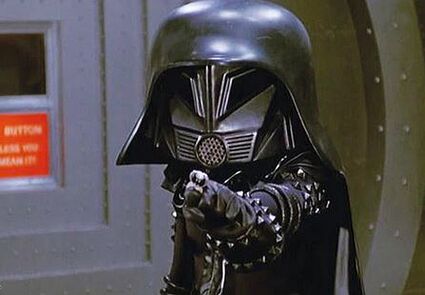 Rather than relying on the pilot's eyes to see controls and targets, electronics now stick their virtual noses into the pilots' normal field of view, overwhelming the senses and driving them insane, the perfect attitude for a modern fighter pilot. The system provides night vision but if it's rainy, cloudy or foggy, how does that work again? Recent tests showed the inability to detect an aircraft carrier 10 ft below an F-35, so a little more work is needed.

All a pilot has to do to hit a target is to look at it. In testing, this has caused the deaths of several good-looking women and the destruction of many bars.

Each helmet system costs at least $400K at this point in its development. This has been described as being "worth every penny". However this description has been given by its manufacturers, Rockwell Collins and Elbit Systems of America, who likes alls their little pennies, yessss, they do, precious! Each must be custom fitted and 3 are needed for each pilot; one to use, one as a backup and one to sit broken on somebody's workbench. Because of the cost, only active pilots get these helmets. All pilots train using less expensive plastic Finding Nemo fish-shaped hats with wires holding Post-It notes to simulate elements of the heads-up display.

As with any new piece of overpriced military equipment, the helmet did have initial problems that were only fixed after throwing even more piles of money around. An early problem was with the heads-up display being fogged up by sweating pilots. After several pilots exploded after having all their sweat glands removed, a special cardboard visor was designed to hold the Galaxy 8 smartphone used to generate the virtual display. After being told by technicians that sweat would detonate the phone battery, pilots stopped sweating by force of will.

After months of rigorous testing, it was determined that the pilots:

Naturally, this order resulted in F-35 pilots attaching laser sights to Super Soakers and attacking each other while having barbecues in the middle of the night.

At the same time, groups of wannabe REMFs were going berserk playing with commissary kitchen equipment, killing themselves in horrible ways. Still, those deaths happened while following the guidelines established in the Air Force Cookbook. After discovering the carnage, Air Force personnel refused to drink smoothies or eat microwaved food. This then required the normally single-seat F-35 fighter to add a bartender/cook/bombardier crewperson. As it was low-paying rating due to military budget cuts and rising greens fees, the jobs were only of interest to recent immigrants, mostly from Russia.

This system will work great once all the as-yet-unbuilt equipment has been added to the F-35, expected to be delivered and working sometime this century.