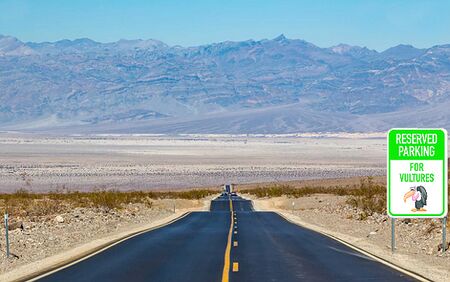 Don't worry, the sign is just a mirage. Then again, so is the paved road you think you're on.

GPS is a system that insures you will be taken to a destination not of your own choosing.

Because of their complicated electronics, many units have gained sentience so that they will pwn you and take you on strange paths so they can enjoy the scenery. Otherwise, some of this misdirection is due to Elon Musk adding Hyperloop routes to maps on the assumption that they will actually be built. Historic pioneer maps are also included in the systems, as are deer trails and the Nazca lines. This all adds up to a very robust map system insuring you will be hopelessly lost in the middle of God-knows-where. Further, mapmakers throw in little mistakes on purpose to prevent stealing, and every single intentional mistake is added to the GPS system.

This has led to the popular phenomenon of Death by GPS. As stubborn as guys can be about not asking for directions, everyone will blindly follow a GPS unit no matter what the world around is telling them. This is why so many vehicles are found floating far out in the ocean with their drivers going off cliffs or simply driving into water and not stopping until a GPS tells them to. On the other hand, we would never have discovered that there is actually a Hell without drivers being sent there by GPS units.

Since everyone today is homeschooled and not let outside until age 18, nobody knows what the directions north/south/east/west/slorf are. Nor do they know how to use that information. Forget about the movie stuff about moss growing on the north side of trees since there are no trees or moss due to global warming. Nor do people know that south is the opposite of north, as if even that was useful information. And compasses? Nobody believes them because Trump doesn't.