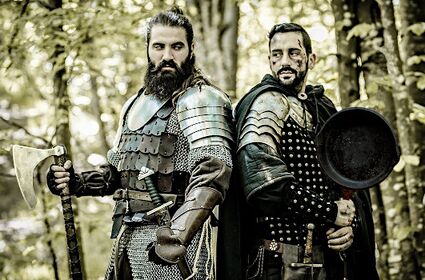 Axe vs. skillet. Who will win?

A frying pan (Norwegian Tibetan: skillet) is one of the great inventions of all time.

During the Middle Ages, Vikings getting pushback noticed that their wooden shields and themselves were susceptible to fire arrows. While body armor was considered not to be very macho, Vikings did decide to reinforce their shields with iron. An iron plate was dished out to accomodate the central boss sticking out of their shields. The plate also had a handle so it could be removed in close combat as it was very heavy. These plates were called skillets for lack of anything else.

After heavy losses of both Vikings and skillets after the Battle of Stamford Bridge in England in 1066, English farmers recovered Viking spears for use in barbecuing. They also took the discarded skillets to use in hammering nails and pounding badgers on the head. When their King Harold rushed back to defend against the invading Normans, some soldiers brought skillets with them, using them to ward off volleys of arrows. Alas, King Harold dropped his and got an arrow in the butt (not shown on the Bayeux Tapestry) then turned around and got one in the eye (also maybe not shown on the Bayeux Tapestry).

It was not until the 20th Century when Nikola Tesla was experimenting with electric catfish and Graham crackers that things changed. A piece of equipment burst into flame and Tesla grabbed the nearest thing handy, an antique skillet, to put out the fire. His vigorous pounding made his unprepared lunch fall off a nearby table and land in the skillet. His lunch, a slice of ham and two eggs, fell into the now very hot skillet, and began cooking. Tesla had invented ham and eggs and the frying pan at the same time.

Tesla modified his frying pan with higher sides and it became a big hit for cooking. Even better, it could still be used to bash badgers on the head. This is why nowadays, we no longer have to hold bacon with our fingers over an open fire nor have to hold eggs cupped in our hands in front of a blowtorch to cook them.