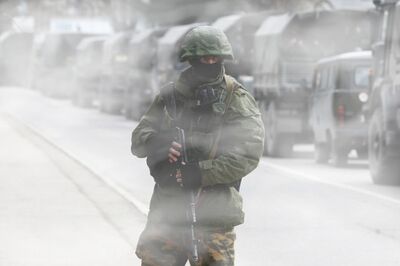 The fog of war is a curious phenomenon.

Low flying cumulonimbus clouds with create realistic-looking tanks, missiles and troops out of water vapor. Many people state that this is just an optical illusion, albeit one that can take over towns, cities and industrial complexes. Sooner or later, you will notice subtle changes, like the brand-new shackles on your wrists and the ball and chain on your ankle. You might notice the new flag flying over city hall, too. But you will be relieved to find that the city is the same filthy, grubby place it always was, and that the government is as corrupt as ever.

So, except for little green men occasionally raiding your refrigerator or causing the local shops to run out of doughnuts, this phenomenon is nothing to worry about. Because eventually, another fog will descend and this will happen all over again. Unless it's the one with carnivorous monsters and giant bugs, in which case you are toast.