Fnurdles are dangerous little creatures with sharp claws and six antennae. They normally live in groups of about ten. The average amount in a herd of fnurdles is 8.386023. They live in broken and/or abandoned rectangular-shaped technology boxes, called 'computers'. 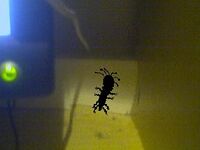 A fnurdle manipulating time and space

Fnurdles often make nests in motherboards, which have nothing to do with mothers. They often make nests out of scrap metal, lost contacts, fingernails, and toothpicks, which they take from the surrounding area. Unfortunately, due to the growing demand for motherboards and rectangular-shaped technology boxes, called 'computers', fnurdle population is quickly dwindling. Something strange is going on as a fnurdle is nesting in motherboards is they drool all over the place. They than think about the meagher tree while they hibernate for the day.

Habits, which are not habitats[edit]

Carrots have been known to be found only in fnurdle nests. Due to this, the domesticated fnurdle is steadily rising to become one of the most popular pets of all FLOOSHEEMUMBUMHUM.

I hate conclusions. They sicken me. Not literally, but they do. They are horrible generalizations that teachers insist are important, but are really not. It's all just a scheme by the government.