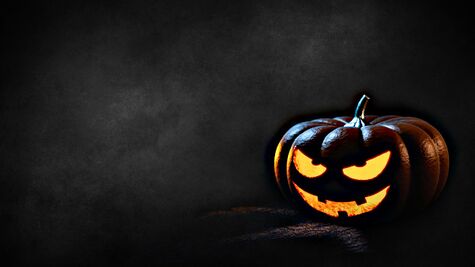 Oh look! We must be near Swindon.

It was the night of Normalday, October 31, and something was different...

The sky was a bright pink, as though a massive, sky-sized sunset had stopped mid-set. It was 8PM. Frail old women were pottering about the street with smiles of contentment on their faces, apparently not worried about the strange doings. Instead of pumpkins with candles inside, they could see that gardens were lush and green, decorated with beautiful, multicoloured arrays of flowers. The sun shone down weakly even though it couldn't be seen in the sky, so that no matter where one would look, one's vision was slightly obscured by a reflective light. Meanwhile, a cute little lamb was tied to a lamp-post outside a newsagent's as its owner shopped inside; it stood on its hind legs with its tongue poked slightly out when people passed by. It got an "aww" and a pat on the head every time.

Jakob, 9, looked on with a face of utmost disgust. He saw all the pedestrians making their way and all the bright decorations. He felt smothered in a tide of forced jollity.

'Oy, tosser, I'm not the bloody Grinch! This is Normalday!'

The infamous suburbian town of Swindon was quite unlike any other. Sure, it never got dirty like many towns. Elsewhere knife crime was rampant. But that was only because the dirt and knives had had a meeting and decided it would be for the best if they stayed away from that corner of Wiltshire. But according to how most people in the country saw it, Swindon was a Hallowe'en town. No-one that lived there knew it, though, as it was what they had been used to their whole lives. They were a bit scared of other towns, where Hallowe'en was celebrated merely a day or so each year. Swindon residents found it quite creepy that people couldn't manage to stretch Hallowe'en to 364 days in length.

Nonetheless, once a year, the usual black and orange paraphernalia came down from the walls and other awe-inspiringly beautiful decorations took their place. All for the sake of tradition.

Tradition. Just the word made Jakob sick down to his inner being. He was most definitely a rather wilful and malevolent child who certainly didn't see why, for the sake of tradition, he had to be forced to take a break from Hallowe'en. He didn't do things 'because they're what's done'. He did things because 'she gave me a look I didn't like' or because 'I can'.

And so it came to pass that Jakob came up with an elaborate plan to ruin Normalday. He spent months in planning the previous year, then took much of the current year to bring his warped plan to fruition. A twisted smile would cross his face when he thought about it causing passersby to cross the street when they saw Jakob.

So as it had every year for the last 86 years, the grand Normalday parade began. Floats and bands began moving down the high street with crowds lining the sidewalks. As happened every year, drivers attempting to pass through Swindon queued up behind the parade, then were cheered as the passed through the town. The only difference this year were the pink skies, not to mention the sunlight. The crowd was abuzz with gossip about it, but stopped talking when the first band started up.

Jakob watched from high above the street atop the tallest building. He watched and waited, becoming impatient but trying very hard to keep to his original plan. Finally, he could wait no longer when the parade was still only halfway along its route.

There was a loud screaming sound and a boom and crackling, with orange fireworks exploding high in the sky. Jakob was a bit irritated as the pink sky should have been black for maximal effect. But he was nonetheless pleased that the crowds had looked up and seen the fitst pat of show. Part two was triggered when hidden paintball guns fired off and turned all the fancy street decorations either black or orange. The band musicians, marchers and floats were also hit with coloured paint, complete confusion bringing the parade to a halt. Jakob couldn't help but laugh out loud. The only others who were pleased was the local Loyal Order of Orangemen.

In the resultant quiet, the crowds, parade participants and Jakob could hear a rumbling noise growing louder and louder. From his perch, Jakob could see dark green waves converging on central Swindon. A flood! And it wasn't only coming from one direction, but from all directions. Jakob started actually looking forward to the destruction of Swindon, making him part of Swindon's history.

Remarkably, the crowds froze in place, stunned by the impending disaster. The waves swiftly reached the crowd. As Jakob watched, the waves swirled around people leaving them standing and also leaving the floats intact. There was screaming of course, but no-one seemed to be touched. Yet the wave began rising against the building that Jakob was on, causing him to break into a sweat.

Jakob watched in horror as the dark green wave topped the building roof and rushed toward him. He could hardly believe it when they resolved into a solid mass of goblins of various types and sizes. The writhing and snarling mass surrounded Jakob. From out of the scrum stepped a portly Jack Skellington-type who sounded quite like Stephen Fry.

The demon glared at Jakob. 'You vainglorious worthless twat! For decades now, Normalday was a special day for all of us from the underworld. It was the one and only day of rest for those of us living deep under Swindon and in the back room of Sainsbury's. Now, you have spoiled our holiday! Our only holiday! And for that, you must pay the ultimate price!' With that, several goblins pounced on Jakob dragging him into the dark green mass. The flood of monsters then receded, not touching anyone or anything once again. This time, it receded quietly and disappeared into the distance leaving everyone speechless.

The next day, Hallowe'en decorations went back up and life had returned to near normal in Swindon. More than few residents wondered whether little Jakob had been turned into a demon or was transformed into a Bunny snail or some other odd creature. Despite their hatred of him, most Swindon residents were again shocked and actually felt sorry for him when Jakob was seen living in Ipswich.