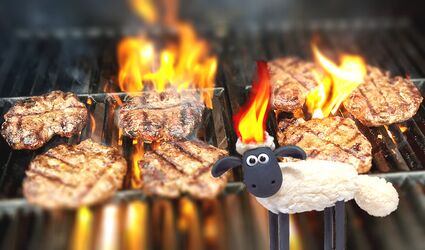 Owning Flame sheep not only will keep your lawn neatly trimmed, but will prove useful for starting the backyard barbecue.

Flame sheep have been known since the dawn of time when Prometheus brought fire to humans and tripped and fell into a flock of sheep blocking his path. So Prometheus not only invented barbecue but discovered that some sheep ignited but kept burning without being consumed for unknown reasons. Even Bill Nye the Science Guy has been unable to explain this phenomenon. So don't even try yourself.

Phoenixes then watched and studied Flame sheep with some daredevils alighting on them and finding that they did not burn to a crisp. Thus, there was a magical component to the fire that was also transferable, which suited phoenixes completely. Fire salamanders also joined the group but other animals, even normal sheep, chickened out and gave those three a wide berth. All three were welcomed in caves by humans during the winter, but were thrown out during the summer for obvious reasons. With that type of treatment, Flame sheep became disgusted and moved to the wilderness.

It was there that a single Flame sheep encountered Moses, both of them. The Flame sheep naturally gave Moses the secret sheep password mistaking Moses for another sheep due to his wild hair and beard. Meanwhile Moses mistook the scruffy Flame sheep for a burning bush and thought God was talking to him. He transcribed what he thought what God was saying the best he could onto stone tablets, creating the Ten Commandments, still read and ignored by Christians to this day.

Flame sheep have since been blamed for major fires throughout history: the burning of Rome (64 AD), the Great Fire of London (1666), the Great Chicago Fire (1871), Burning Man and more. However, recent studies have shown these were actually caused by chipmunks playing with matches. Again, it is thought that the magical nature of the fire prevents setting wood and straw on fire, something that J.K. Rowling failed to explain properly. Still, it was found that Flame sheep, with the proper additional spells, could be used as cigarette lighters, with witches able to acquire large cigarette card collections plus their all-important waffle irons obtained by redeeming cigarette premium coupons.

Most recently, after testing in vacuum chambers, the first Flame sheep was sent into space aboard a Tesla automobile. With only the tape deck and a few 80s tapes to keep it company, the Flame sheep is expected to reach Neptune in 2028 for reasons that escape us at the moment.