Fishing in the Middle Ages 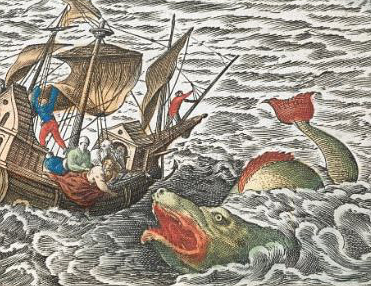 Fishing was hazardous in the Middle Ages, but only for some people.

Fishing in the Middle Ages was much like it is today, only different.

Peasants in Europe in that time were very religious as proven by most of them having the IKTHUS fish emblem stuck on their horses and asses. Therefore, they had a hankering for fish no matter where they lived. Plus the local baron or prince would have killed them for catching and eating one of their deer. So it was fish for supper, then.

While there were many local rivers and streams, most peasants had a strange aversion to fish being caught downstream from the local cesspool. Plus, they wanted the truly big fish, ones that could feed the whole family with plenty left over to spoil and rot by the next day. So every family of the time had a seagoing boat parked next to a haystack and ready to take to the ocean at a moment's notice.

This led to the famous phrase "Let's take Grandpa fishing!" that still strikes terror in the heart of any oldster today. This fishing method, still practiced today by traditional fishermen off the Irish coast, involved hanging Grandpa over the side with a rope tied to his leg (see illustration above). For even then, people knew that to catch the really big ones, you needed big bait. A tough, sinewy grandfather would be extremely chewy for fish and therefore would keep them on the hook longer than than, say, a marshmallow. After catching a big one, Grandpa would be recovered from the fish and allowed to dry out and sulk until the next fishing trip.