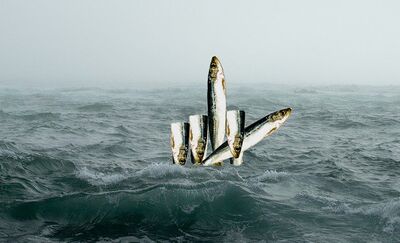 A fish finger is the name of a phenomenon noticed more and more frequently by North Sea fishermen.

When fishermen are unable to net anything due to quotas despite finding schools of the wrong type of fish, oftimes several fish will rise up out of the sea and bend themselves into the familiar hand sign. Fishermen are split on whether it is a Churchillian 'V' for victory or an indication to fuck off. Scientists suppose that fish don't even know the difference while a minority supposes that fish damn well know the difference but are leaving the interpretation open to pwn fishermen, and by extension, humans. Confused British fishermen charge that the fish were taught this by French fisherman since fish species have also been seen wearing berets and smoking Gauloises cigarettes noticeable by their distinctive odor.