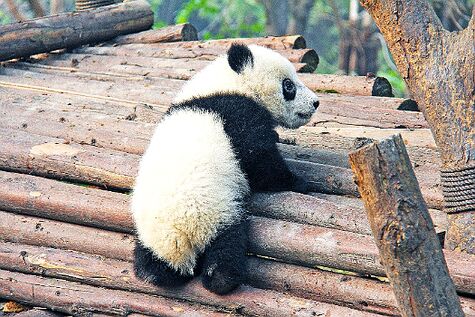 Here, a young re-enactor is helping to build a log cabin like those constructed by immigrant pandas in the 1840s. Note the obvious zipper in the costume.

Almost everyone thinks the first Chinese immigrants came to America as laborers on the transcontinental railroad and as miners just after the end of Civil War. They actually came earlier than that.

But these were not human immigrants. Due to clearing of large stands of bamboo in China at the time, many pandas were left homeless and without food in the 1840s. Hearing about opportunities in America, they built their own boats and sailed to what is now California, Oregon and Washington, living off seaweed and hardtack washed down by beer on the long voyage across the Pacific.

Immediately upon landing, they were treated suspiciously by humans and bears alike. However, they were respected for their strength and being hard workers and so were largely left alone. Plus it just took too long to say "black and white peril". Just as they became established in their new homeland, the Civil War began and pandas were drafted into military service. Females were drafted, too, since nobody wanted to get close enough to tell the difference. Pandas served with distinction, most famously for being among the Union troops that stopped Pickett's Charge at the Battle of Gettysburg.

Only a few pandas survived the war, They returned to the West Coast only to find their lands seized for failure to pay back taxes. Their former properties were now filled with tacky condos, storage units and 7-11s, a familiar story in California's history. Heartbroken, some returned to China while others joined Buffalo Bill's Wild West Show where they dyed their coats and pretended to be bison. By the time Chinese contract laborers arrived to build the railroad, little trace of their predecessors remained except for a few stands of bamboo brought over by pandas.