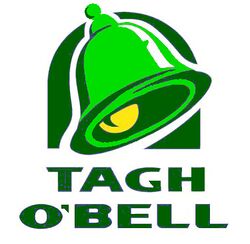 As tourists, we are always excited about experiencing the local cuisine but reluctant to try specific restaurants. In Ireland, there is only one choice: Tagh O’Bell. With over 400 locations in the greater Dublin area alone, How can you go wrong?

Your first impression will be that of being home. That's assuming your home has furniture bolted to the floor and has the sounds and smell of traffic from a major motorway just outside, 24/7. You will be greeted in that friendly way that is so typically Irish: "Effing American, eh? No shite U2 jokes outta your gob or you'll be gettin' a mop up your yazoo, mind."

As we scanned the menu, we noticed the cooks all seemed to be Mexican, just like in any restaurant in the US. But then my wife realized these had to be Black Irish, mixed blood people coming via the Spanish Armada, which I think was about 20-30 years ago.

While all the offerings looked tempting, we decided on the enchiritos and chalupas. We're told these are both about as traditionally Irish as you can get. The first dish is a baked potato in gravy sprinkled with crispy potato bits. The second is a potato wrapped in another potato and stuffed with potato. Each came with a side of sliced potatoes. Great!

Rather than bother the wine steward, we opted for the beers on tap. Over 30 kinds were available, though most of the taps were being used at the time, with people sleeping on the floor under them. It all turned out not only to be self-serve, but all you can drink! What a bargain!

As we got up to leave, we were in for another treat. Bats living in the thatched roof swooped down and polished off any crumbs that were left. What a show, with maybe a hundred of the flying critters going at it.

Of course, the meal was completed to perfection with the traditional Irish farewell we would hear so often during our stay: "Don't let the door hit yer arse on the way out, hear?"