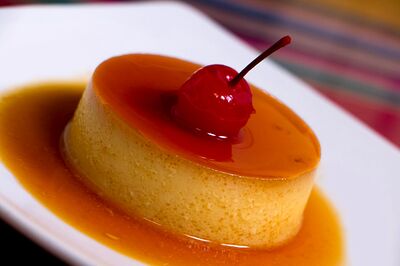 A dish of flan caught in the act of levitating.

The Fargo Phantom Flan Flinger was a mysterious figure that attacked citizens of that North Dakota city until 2016.

Starting in 1997, there were occasional reports of a custard-like substance being thrown at people and buildings. However, when combined with reports of people being hit by flan and junket, combined with forensic taste testing, a clear pattern emerged of wanton mayhem. Police were called in but simply shot anyone buying any kind of dessert mixes, eggs or milk in stores. Decoy mannequins were then placed around the city but were either arrested for loitering or inciting prostitution. With the cooperation of nearby towns and cattle, custard mixes were not sold within 100 miles of Fargo. Anyone knowing the recipe for flan was also kept at a distance, although Mexicans were already being shot on sight if found within the city limits.

Several persons or groups of interest have been suggested:

The attacks have stopped as mysteriously as they began. Still, residents remain wary and dry cleaners remain hopeful.