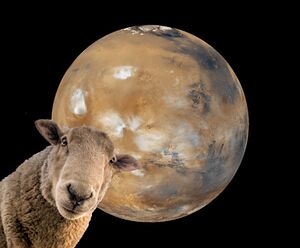 Forgive this poor sheep for thinking the Falkland Islands are on Mars. They are actually on Saturn.

If you mistook the Falkland Islands for New Zealand, we wouldn't blame you. After all, wherever you look in either place, there are more sheep than humans by a wide margin.

These cold and windswept islands are perfect for sheep with their warm wooly coats. That is, until shearing time. But this is not a problem since muttonsicles are a favorite in the United Kingdom and locally.

Since they are located about 300 miles east of the southern tip of Argentina, rumors of the islands existence drew the interest of that country. Since Argentina is full of Columbus fans, they decided to re-enact his voyages backwards, sailing east and discovering the Falkland Islands in 1982. Surprised sheep put up a stout defense of bleating and running away, to no avail. Humans were also surprised to find soldiers living in their houses. When the Argentinian government thought they had actually reached New Zealand they were ecstatic. For they were all Lord of the Rings and cheese fantards and had coveted kiwi birds for many years as well. And don't forget the muttonsicles.

Well, we know how that all turned out with nukes wiping Argentina off the map and Falklands sheep declaring their independence. It's just as well since the British have lost all their maps and no longer have any way to find the Falkland Islands.