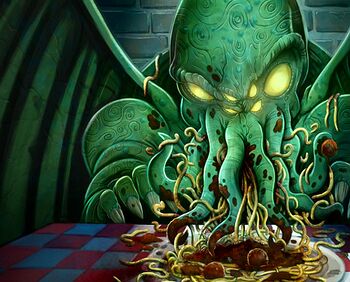 As alway for tourists, it's all about the food.

Euphoria is an island resort in the Atlantic Ocean.

Cruise companies like the Bahamas as a destination although tourists want more than just one country's worth of destinations in their package, no matter how many things there are to do in that country of many islands.

Lilith Disney then hinted to the Disney Corporation board that there were other islands not marked on any map that would make ideal tourist destinations with relatively small amounts of development money. This was scoffed at by the board and the idea was shelved. That is, it was until after her death, when another Cthulhu cultist, Michael Eisner, became CEO of Disney. He revived the idea, knowing that the home of Cthulhu, the island of R'lyeh, existed somewhere in the Bermuda Triangle.

Many tourists today report Haiti not to be the devastated and impoverished nation shown on the news, but a lush, beautiful place with happy natives. But what has been done was that a new pier was built for cruise ships instead of spending it on food for starving people. It leads to a single street full of shops and stands for tourists to visit. Little do they know that this is just a small area with planted palms surrounded by electrified fences and guard towers and minefields to keep out nearly all Haitians. The light-skinned ones that speak fluent English are the ones that are allowed in and must pay a daily fee to sell their goods. They are then kicked out after a cruise ship leaves. Tourists are happy, cruise ship lines are happy, the army is happy, corrupt Haitian officials are happy.

So, despite R'lyeh being "a coast-line of mingled mud, ooze, and weedy Cyclopean masonry which can be nothing less than the tangible substance of earth's supreme terror”, Eisner had the thought that something could be done to make it more appealing to the general public and not just Goths and horror fiction fans.

The basic problem was locating R'lyeh in the first place as the island would sink beneath the waves on a regular basis. Ship records were examined and it was found that sailors often heard parrots' voices saying things like "Fhtagn" and "Yog-Sothoth" in certain parts of the middle of the open ocean. This then could only come from R'lyeh, being the plaintive cries of drowning parrots as the island sank beneath the waves. But records seem to show that there were three spots identified where the hive of damnation could be.

Eisner finally found and contacted Cthulhu's unpublicity agents in New York City. They revealed that R'lyeh appeared simultaneously in several spots in various earth oceans due to being the center of a dimensional gateway. Impressed with Eisner's evil ways, that group forwarded Disney’s interest in developing R'lyeh as a tourist spot to the Hideous One, and a meeting with Cthulhu himself was arranged. 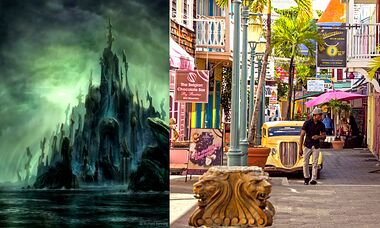 R'lyeh before (left) and Euphoria after (right).

Since Cthulhu was naturally/unnaturally reluctant to eliminate the green slime and ooze that was enjoyed by his minions on his island, Disney Corporation pitched the idea of Fake Haiti to him/her/it and the projected millions both sides would make. A deal was struck and the Disney imagineers were called in.

Since R'lyeh is a triangular island with a large volcano blocking views across the island, it was decided to build three Fake Haitis, one on each side, with each area having a different theme. Therefore, a cruise ship would arrive at one side, sail away and return to another side, and then once again. Cruise passengers would think they were arriving at a new island each time. Only the area around a fake street would be landscaped in the typical Disney style of its theme parks. It was then surrounded by fake palms as a screen to block out the sight of mind-bending asymmetric unbuildings. From a distance, the green slime covering much of the island would be mistaken for trees.

The island was renamed Euphoria for tourist brochures and was presented as a country with three major islands. The propaganda department of the Russian FSB was hired to write and post fake articles for Wikipedia and other sites on the off chance that someone would try to look up Euphoria.

One area has a Disney theme, with various slimy gibbering nightmare creatures loaded into Disney character costumes to walk around and pose for pictures with tourists. Similarly, shopkeepers are presented as humans but really are not, with parrots or smartphones with Siri or Alexa hidden in the costume hat to respond to customers.

Another has a pirate theme, staffed by similar horrific weird creatures in disguise. The third originally had a horror theme with R'lyeh residents appearing as they actually were. Unfortunately, the stench was overwhelming, and that area was redone in an outer space theme with workers now dressed as little green aliens.

Business on the Bahamas tours has tripled with many people raving about the islands of Euphoria, being the stereotypical Caribbean-type destination that tourists seem to expect and like. Cruise ships have proudly reported zero missing passengers on this route, but only because they are replaced by R'lyehns when necessary. In fact, more passengers seem to leave than arrive, although that figure is never kept, largely because creepy horrors from beyond are as bad as math as humans are.