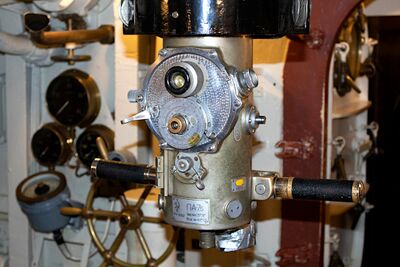 Vasily checked the periscope once again. He had not been seen or even suspected. Good.

His one-man submarine prowled the waters like a shark. Except Vasily was hunting for information, with a full array of microphones and cameras deployed. This was difficult work, but the veteran submariner was up to the task. After all, he had been on station for 11 months now and was always very careful to remain hidden when not on patrol.

This game of hide-and-seek with the Americans was second nature to him. And they were still totally unaware of him lurking right in their midst. Because Vasily was inside the US embassy in Moscow, in an aquarium in the vice ambassador's office. This was possible due to Russia's superior shrinky-dink technology. Vasily thought back to the day when he volunteered to be reduced to a little speck to operate an equally tiny submarine. Take that, American Ant Man!

Yet, he was worried. The angelfish was bullying the other fish and was starting to get aggressive with the sub. Sooner or later, he might have to fire a torpedo or two at it, running the risk of being discovered if he missed his shot and broke the aquarium glass. Perhaps a talk with his contact, Lyudmila the cleaning lady, was in order, where she might "find" the angelfish had "accidentally" jumped out of the tank. He sent the coded message and set his sub behind the ceramic castle to wait.

Meanwhile, inside the angelfish's brain, Capt. Zzork of the 453rd Miniature Aquatic Force, kept an eye on the tiny Russian sub. For the Giant Space Raccoons of the 8th Dimension had even better shrinky-dink tech and were all about pwning both the Russians and Americans. Capt. Zzork checked his chronometer. It would be ten minutes more before the angelfish had to drop a turd, so there was plenty of time for him to drift the fish directly over the Russian sub. Once again.