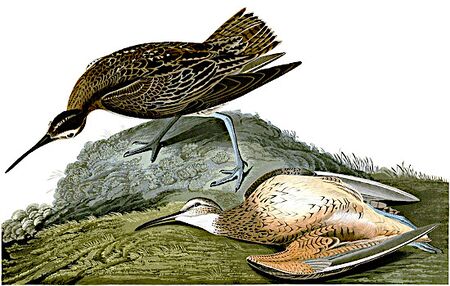 The Eskimo curlew is a bird with feathers, a beak and wings.

Currently, they may be extinct, since everyone today is busy admiring their own and other people's shoes and fail to look up in the sky where Eskimo curlews might be flying. Guest books left out in fields and beaches remain unsigned by any Eskimo curlew in the last fifteen years. However, that might be due to the shyness of the birds, if that is what they are.

Very little is know about their behavior. They are suspecting of migrating from somewhere to somewhere else by the method of flight, or so it is thought. They may make nests or not, possibly made out of some kind of objects. They are definitely known to lay eggs, which are delicious scrambled with toast and bacon on the side. They are known to eat something or the other for food, though again, extinction is suspected since they have never been seen going through a fast food drive-thru.

Old stuffed specimens of the Eskimo curlew are known, with John Audobon recording them in paintings using posed dead birds he had obtained by shooting a few dozen. They proved excellent for target practice so this once-abundant bird was rarely seen after the 1800s. Therefore, they appear on both the list of possibly extinct birds and the list of fun birds to shoot.