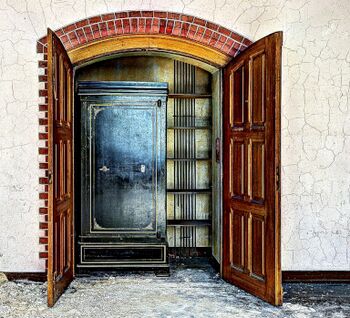 So we had to figure out how to unlock the safe where the was another safe, then another, then a closet door leading to Narnia that you had to go through to get to Atlantis. Then...

An escape room is a cool game for get-togethers. They are even in amusement parks, since visitors are planning to die there, anyway.

So, a group of people are locked in a room and must solve puzzles in order to get out. Not sudoku or crosswords, either. There is often a time limit. There also may or may not the possibility of getting hints. And people liked the Saw movies but they don't want to see the same things done to them. That torture stuff now used as team-building exercises by corporations is also old-hat to them by now. Got it?

Those are just the basics. Now, did you know that if the group can't solve all the puzzles, they should be allowed out after a certain amount of time? Four weeks is kind of too much, but that's just me saying that. After all, the next bunch wants to take their shot at the escape room. Also, not every puzzle should be extremely difficult to solve. Changing goldfish into gold might be a challenge with you, but it's really, really, really hard unless you... You've done it? Twice? Woah.

There is also probably no need to roofie everybody to get them to play. But now that it's done, it's done. Remember that they're your friends, so, sorry to say, they're not very bright to start. They'll have trouble working the doorknob even if they somehow figure out all the puzzles. You removed the inside doorknobs as a puzzle? Pretty good, but okayyyyyyy.

Best practice is to let them start out with something easy, just to give them confidence to keep working on the puzzles. That thing with the tiger hidden in the cupboard is definitely a clever one, but the rotating knives that drop on players when they enter the room is probably too much for the beginning. Just saying again.

So, can you let me out of the closet? Like, now? Hello? Is anyone there?