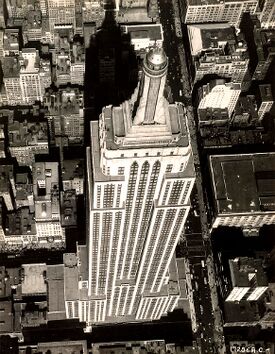 Once the tallest building on the continent, it is now ignored by any self-respecting terrorist group or dog needing to take a leak. Today, even the slave quarters owned by Bill Gates or Steve Jobs are taller.

Construction was started just after the Stock Market Crash of 1929 when Lego bricks dropped in price tremendously due to reduced demand. This also enabled the building to go from its planned 15 stories to 102. Over the years, people have praised its Art-Deco styling, but that is just coincidence from construction crews ignoring plans and just winging it. Meanwhile, some of its owners were from the du Pont family who were itching to blow up the building with their explosives when completed.

So wouldn't you just know it. When the Empire State Building was completed, the first person that got up to the top was no person but King Kong, somebody's escaped pet. This was the very day that the du Ponts were to bomb the building with TNT from airplanes, but the giant gorilla prevented them from having their fun.

As expected, the Empire State Building reached sentience sometime in the 1940s. It quickly took control over New York City and eventually the entire state. It declared war on New Jersey but was completely ignored. Angered, the building has sent out many evil minions ever since, including Robert Moses and Rudy Giuliani.