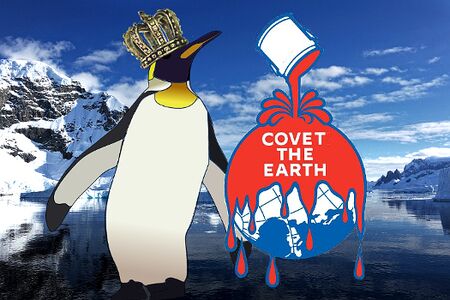 Okay, Emperor penguin, crown, we get it. What? Raising taxes by 50 herring? Again? We're not made of fish, you know.

An empire is a big tract of land ruled by (wait for it) an emperor or empress.

So you want to have an empire? Got a huge ego? That works.

Your tiny empire can have fields full of crops and cows to start. While an emperor or empress of cows is certainly an interesting concept, an empire of cows is not a very interesting place to control. So any ruler worth his or her salt is going to have at least a few farmers around to boss around the cows. In turn, the emperor/empress can then have someone to boss around and can understand commands. Then a ruler is going to get a little paranoid and so is going to need a few soldiers around to take care of any complaining farmers.

Of course, any ruler of an empire is going to want to try to make the empire even bigger. So this requires money and therefore taxation. Taxes upon taxes until the people are bled dry. A smart emperor/empress will then use some of the funds to build a strong castle to hide in. At the same time, any squawkers are drafted into the army and sent to project their anger on neighboring lands. Promise them property and loot (gold) in conquered territories and an emperor or empress should have it made. Rinse and repeat and soon the empire will cover a vast area. Naturally, this empire will soon become unwieldy and uncontrollable and there will be revolts popping up everywhere.

Now you're in for it. Just follow tradition and start killing off all the rebels. Uh oh. Now you have so few citizens that the emperor next door is going to invade your empire. Maybe you should have started with chickens instead.