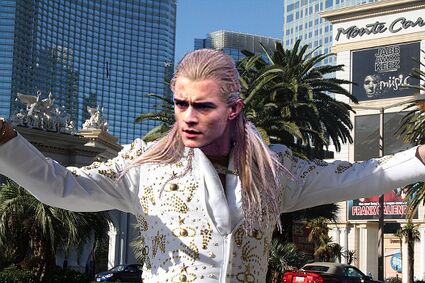 Elvish Presley was a blood relative of Elrond, son of Whoever, both elves of Middle Earth.

For just as Sauron was the One Whose Name Must Not Be Spoken, Elvish Presley was always referred to as "What, him?" by the elves. This was because Presley refused to swan around in long robes or gowns of taupe, ecru and other boring colours. Instead, he had the dwarves make him a flash form-fitting suit of rhinestones. Thus clad, he was shunned by elf fashionistas despite wearing capes, huge collars and big lapels. Eventually, all elves of Rivendell would avoid him, as Presley so coveted his suit that he wore it every day, never getting it drycleaned.

And so it came to pass that Elvish Presley moved to the walled city of men known as Minas Vegas, as close as human folk dared to build next to Mordor, now known as the Los Angeles Metropolitan Area. It was there that he used his vocal abilities and theatrical moves to enchant human females and orc women (if there are any). His fans, including crossdressers, would throw their panties on stage, many times with them still in them. The synergy created a terrible unstoppable arcane power manifested as an orange glow that enveloped the city. This could not escape the notice of Sauron, who resented this blatant display of power on his doorstep as well as the bright lights that kept him up at night. The Evil One also felt threatened by the outward display of underwear and the word "Tuesday" written thereupon. Therefore, Sauron raised a great army of orcs and Uruk Hai to march against Minas Vegas to utterly destroy it.

So, battle was joined. Despite Elvish Presley's finest hip shakes and fake guitar playing, his fan army was no match for orcs with pointy sticks and oversized kitchen cutlery. Presley was captured and transformed into one of Wraith Witch Kings, forever damned to wear only black like some impoverished Goth university student.